Greetings from the skies! I am in transit from Kuala Lumpur to Tokyo. Finishing up this nice little report on an old birthday gift I finally got to strut.


Fashion: I was fortunate for last year's birthday, a close mate and colleague bought me a shirt from Jared Lang, a luxury brand based out of Miami. I had never heard of the brand before, and was more than shocked and grateful for the gift. The sad part is, since it is such a bright color, I could not wear it during mid-autumn, let alone the winter. Over a year later, it is nearly winter again, so I thought sporting it at an international locale was a brilliant idea...more so I did not have a chance to wear it altogether. I wanted to save it for a special occasion.

The colors are quite loud, which I enjoy! If one would have met me five to six years ago, they would have never caught me in this shirt. Let alone seven years ago when I first moved to New York City, and definitely never before that in California. Those with a conservative appeal may look elsewhere, yet do not completely dismiss it! I suppose the moral is this:


One's style builds over time, and that was one of the best aspects I love about starting this business. To properly research, document, and showcase for anyone that is finding their own style and needs a little guidance or push along the way.

Anyhow, behind the cuffs and the collar, are contrasting black designs. I love this particular detail as it gives depth to the shirt. I am happy to see more customization among off-the-peg clothing that normally would be offered as additional complimentary customization on a shirt. Some examples are cuff and collar design, buttonhole threading, and so on.

Travel: The point-of-interest for me was one of three islands off of Lombok island, all east of Bali, Indonesia. Specifically, Gili Air - the middle sized island of the three, closest to Lombok, and overall appealing to all types travelers looking to "get away." The other two islands are known for partying [Gili Trawangan], and living the local life in a small and quaint manner [Gili Meno], though all three generate profits via tourism.

The biggest tip I can give about getting to the islands is time tables. Though it may seem apparent, are the different time tables for going to and from the islands. The time frame of the time tables, however, is quite limited. That is, people can come from Bali [as I did] or Lombok. Yet the boats leaving from Bali only depart in the mornings. Coming back is different too, thus, one may consider to cushion a day for departure from the islands. The boat company I took and was quite pleased with was Blue Water Express. The company picks up from your location in Bali; however, the reservation must have been made before 18:00 that day. They provide complimentary water on the boat and sell beer as well.


Uniqueness: An unfortunate turn of event is one of the businesses, H2O Yoga & Meditation Center, caught on fire my last night there as of 2017 November 17. Thankfully, it was only a single building, and the fire appeared to not have spread elsewhere. Since I departed so early the next morning, I was unable to ask precisely what happened, yet their healthy bowls are really good! Definitely try them out if in town, though they take a moment to prepare. You can blame the island lifestyle if anything [insert witty comment here].


I know there has been quite the hiatus here on FashionTraveled, so I appreciate the readers' patience as we, some readers and I, have discussed my strive for consistency in this aspect of life. Without further ado, here I go.

Fashion: I am fortunate to have found a seat during Singapore Fashion Week 2017 [SGFW]. Granted, the show I attended was women's fashion, I believe as a true connoisseur, one would be supportive in nearly all aspects of fashion. A little history, Singapore Fashion Week has been around since 2001, yet only since 2015 it has returned with a larger scope and scale to have a broader reach. 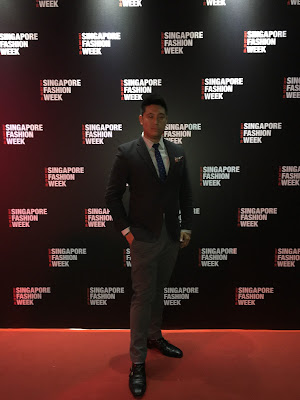 Jacket: Ted Baker - I was fortunate to buy the blazer as a standalone at the Camarillo Outlet in Camarillo, California.

Shirt & Trousers: Uniqlo - Generally my go-to when I need something slim-fitting and extremely affordable.

*Note that if I stated "legacy," by any piece of menswear or outfit, the company no longer sells it sadly. There may be things that come close, yet nothing replicated I have seen in recent years.

The show I saw featured two designers as a two-segment: LING WU and GINLEE
Some unique details I noticed in my first southeast fashion week:

Travel: In terms of Singapore itself - Arriving is quite easy. The country is known for its strict laws, the most pressing on my mind as I am writing this, is the need for at least six months of validity on any given passport. This is a requirement of Singapore as a nation. My mate traveling with me was shy of being at six months, and let's say he got in and out successfully without any fines. In short, do not risk it and check your passport's validity. For whatever it is worth, it was the first time traveling with someone with limited experience traveler and I knew my passport was valid! Now I know to check everyone else if ever with others. You live, you learn.

Arriving late at night [01:00 in the morning], the best option and most economical to get into the city, is the city shuttle. It is only 9$ SGD per person, they drop off at major hotels downtown which a list could be found here, and they take credit card! If one does take the city shuttle - Either remember to ask where the shuttle is, or when reaching one end of terminal 1, you shall see a small booth describing transportation options and kiosks in front of two sets of lift. Both are on the right side. Beyond the lifts, is a sliding automatic door, and outside is where the city shuttle meets. Do not be fooled like I was! Downstairs are different types of bus services, such as public, shuttles, and service vehicles.


This wraps up my brief report on SGFW. I hope by the event, I will have more menswear opportunity and options. Currently in Saigon, there are many tailors that can create custom-made clothing; however, I have too little time this trip. In fact, I should have still made the clothes, and came back eventually since I have family here. Until next time!
Posted by Kato at 9:01 PM No comments: